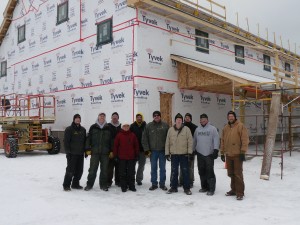 A group of 11 Window Store employees recently volunteered at Bay Cliff Health Camp to install Andersen E-Series Windows in the new Recreation Center project.  In true Bay Cliff style the Window Store volunteers were treated to a family style meal in “The Big House.”  There was a roaring fire in the large rock fireplace, spectacular views of Lake Superior, and BBQ ribs that were better than grandmas’.

The new Recreation Center is a 50’ x 112’ structure that will have a regulation size basketball court, bathrooms, and office space. The covered outside space will be used for storing bicycles and kayaks.

Bay Cliff Health Camp is a non-profit therapy camp for kids and adults with disabilities. During the summer months 170 – 180 children, ages 3 – 17, will come to Bay Cliff for 7-weeks.   There are 130 staff and 20 – 30 therapists ranging in a variety of specialties (physical, occupation, speech, and vision).   The camp helps children realize they are not alone in their disability and learn to believe in themselves, strive for fuller lives, and realize their dreams.

David Marietti was one such camper who spent many summers at Bay Cliff Health Camp. Even though he was born with Downs Syndrome he lived a full life with numerous accomplishments.  After his passing in December of 2014, at the age of 61, his 7 brothers and sisters wanted to donate $175,000 to Bay Cliff Health Camp in honor of their brother.  This was the start of the indoor recreation center.

Another major contributor to the project is Pete O’Dovero.  He has a big heart for Bay Cliff Health Camp and, in his quiet behind the scenes manner, made a donation of $150,000 to the project.

There is a humble spirit that encompasses Bay Cliff Health Camp.   And it is in this spirit that individuals and companies will give of their time & expertise, financial support, and materials.   It doesn’t matter if your part is big or small, it is deeply appreciated, and you will come out feeling that you received much more than you gave.